This is Paul at six months old. As a new born, he was thrown away to die. His crying was heard by a lady nearby. As his crying was lasting for a very long time, the lady began to investigate where it was coming from. She found Paul in deep weeds with nothing on. She took him to her home and wrapped him up in an old sheet. The next morning, she went to the village police to report the finding of Paul. No one claimed Paul, so she took him home with her. I learned of Paul when he was one month old and I went to see him. It was at this time that we named him Paul. He needed milk, nourishment and clothing, which Seed Faith Ministries provided right away. Support was continued for Paul until God brought a sponsor for his needs. Today he is healthy and happy. He still resides with the woman that found him.

Paul is now in 7th grade. He is a very bright young man. 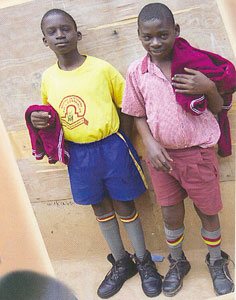 Ssali and Lukwago are brothers that I found while out on a feeding program. They had been left alone for weeks with nothing to eat. They were full of lice, worms and jiggers (a parasite). Their hair was long and dirty. Their clothes were rags hanging on them and their bodies were very filthy. Going inside the hut, I found feces everywhere. They were sleeping on the soil. The stink was overbearing. No food was to be found. I began to ask questions about who I needed to be see to get these boy’s out of this environment. These boys were slow and could not care for themselves. After two days, I removed the boys to a clinic run by Molly and Paul Wasswa. It was determined that we needed to purchase everything from the skin out and all of the medications to take care of the medical needs. A man was brought from the city to evaluate the children and see if he would except them in his school for special children. They were accepted and we transferred them to his school, and they remain there today. They have adjusted very well and are very happy. Seed Faith Ministries took responsibility for their care until a sponsor came forward. Assistance is still needed by the ministry as their expenses are very high because of their special needs.

What is your gift? Has God called you to give some of your gift away, to share it with the unfortunate? Your assistance is needed. If you’re saying what can I do? Ask God to reveal to you what he wants you to do. If you make yourself available he will use you. If you feel led to sponsor, please email us for further information at:

Through Seed Faith Ministries $40 per month will provide one child an education, including scholastic materials and a school uniform, food and hygiene suplies.

New Life Children's Center will be operated by sponsorship of children and donations.

All contributions are tax-deductible.

Funds are needed to purchase medicine and supplies for our Medical Clinic. Our prayer is to provide free medical care to those in poverty.

Sponsor a Child or Family Today!